This post has been sat in draft form for god knows how long! But it is something I have really wanted to write about so here goes…

So a slight detour from the usual Scandinavian obsession, to write about something a little different, but also a large part of my PhD – Canadian landscape painting. Within my research into Scandinavian art I will also be assessing the importance of a group of Canadian painters, namely Tom Thomson and the Group of Seven, in relation to their Nordic counterparts. As part of this, after months of planning, I finally got to go to Toronto & Algonquin Park late last year for a two-week autumnal and artistic bonanza. It was furthermore my first experience of Canadian Thanksgiving – which I actually got to celebrate three times over the course of the weekend. I have never had so much turkey outside of Christmas-time!

Before heading out on this trip, I had an idea of those locations I wished to visit – a large part of this being to locate those places which directly inspired works by the Group as well as exploring the “wilderness” as a whole. Although late in changing colours due to the varying temperature – when I arrived it was the back-end of a heatwave, with temperatures reaching around 25°C most days – the leaves on the trees were just as you’d expect them: wonderfully multi-coloured.

Arriving by bus, a three hour journey outside of Toronto into the beautiful Ontario landscape, we were greeted by the wonderful Wolf Den Hostel & Lodge. Located on the outskirts of the park itself, it instead neighboured Oxtongue River and all it had to offer,. This lodge was the perfect place for the solo-traveller – aka. me! In a dorm room of eight people, of which I was the only Brit in-amidst a sea of German tourists, the experience was unexpectedly fantastic! As a result, group walks became a thing!

The walk to Ragged Falls on Oxtongue River was not difficult, just a little muddy. We first headed to the top of the falls, where quiet rapids quickly turn into these incredible rushing falls, heading down towards the river and where in the distance the autumnal colours have already claimed the trees as their own. The sight is quite incredible, from such a raised position, making out what you can of the landscape beneath the rushing water. For me however, it was the more peaceful rapids behind us, emerging from a hidden bend in the river, and the surrounding red-maple trees that lined the river banks, which had the greatest effect. Taking inspiration from In the Footsteps of the Group of Seven, a wonderful book which follows Jim and Sue Waddington’s adventures into locating those landscapes which inspired the group, I too had hoped to do much the same – but on a considerably smaller scale! Having visited the Art Gallery of Ontario (AGO) and the McMichael Collection prior to coming out into the countryside, I already knew those works which drew inspiration from this Canadian wilderness.

Despite the magnificence at the top of the falls, it was the bottom which appealed to me the most. Here, the waterfall cascades over fallen logs, and dishevelled rocks before calmly settling down into the river, in which the occasional canoe makes an appearance. It reminded me not only of A.J. Casson’s paintings along the shores of Oxtongue, but also of A.Y. Jackson’s painting The Red Maple (1914). These trips to Algonquin had begun by the Group with Tom Thomson who first visited the park in 1912, with a friend H.B. Jackson. From then on, until his untimely death in 1917, Thomson and a number of other artists – including Arthur Lismer, Frederick Varley, and Jackson – all retreated to provincial Canada to find artistic solace. After Thomson drowned on Canoe Lake, while out on his canoe, his friends and later members of the Group of Seven ceased visiting the park, instead seeking out Lake Superior and the Algoma Region.

“It seems like the severing of another tie which bound me to Canada because without Tom the North Country seems a desolation of brush and rocks. He was the guide, the interpreter, and we the guests partaking of his hospitality so generously given.” – Alexander Young (A.Y.) Jackson, 1917 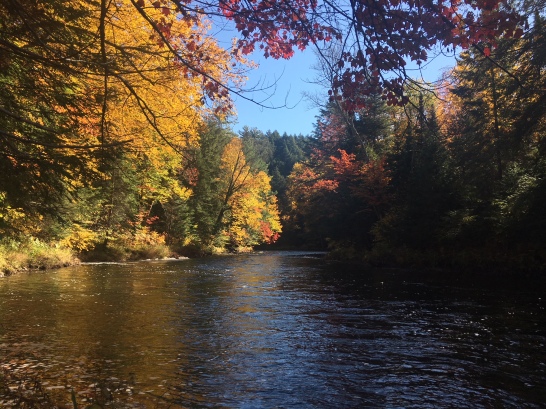 Further visits were carried out to Canoe Lake, and also the neighbouring Peck Lake which was stunning and beautifully calm. As someone who has grown up in Scandinavia, the lakes of Algonquin reminded me very much of home. The absolute stillness of the water, diverging into two separate points along the horizon, surrounded by the brightly coloured leaves of “fall.” Yet with these visits, although seeing the very locations which I knew had played a role in the lives and careers of the Group, if not especially Thomson, they felt more tourist-orientated and less natural and embodying the idea of ‘wilderness’ that inspired these artists. It was on the final day, at the end of a long, off-trail, walk where a small, but powerful, waterfall (Gravel Falls) cascaded into Oxtongue River, that I felt I had gained a proper insight into what these artists saw in this landscape. Void of any other humans, it was peaceful, natural, and much more off-the-beaten-track than I had expected; unlike Canoe Lake, or even Ragged Falls, I could imagine the Group painting along the banks of this river. It was muddy, and slippery, and my new-friend and I didn’t really realise we had inadvertently done a 10 kilometre hike until we got back to the hostel – but it was well worth it!

Spending the weekend in Algonquin, where I not only got to experience the fantastic hospitality of Canadian Thanksgiving, with a pot-luck dinner held in the hostel. I provided an apple crumble, which I didn’t get a chance to sample myself. Experiencing a part of Canada outside of the city was unequivocally the most valuable experience of the whole trip. I returned to Toronto to another Thanksgiving dinner put on by my Airbnb hosts, and to another week of writing, researching, going through art archives, and visiting the AGO more times than I can remember. Although Scandinavia is at the forefront of my research this year, another trip to North America beckons in 2019 and beyond!

(All images are taken by the author Isabelle Gapp). (The research conducted on this trip was supported by funding awarded through the Canada-UK Foundation for Travel to Canada).