Caught up in my own research, I completely neglected to post anything at all, despite having started two posts which now seem rather useless. However, whilst undertaking some of my own research, I came to miss home – Sweden. I’m an art historian specialising in Scandinavian art, so it’s only natural that homesickness kicks in every now and again.

I got to thinking about where I go when I get home, for that necessary dose of art. Inevitably I end up in Stockholm, living only an hour outside of the capital in the heart of the countryside. Stockholm has become famous for its contemporary art scene in recent years, however my own personal interests lie a little bit further back in time.
Home to a plethora of art galleries, museums, auction houses, artists’ homes and studios, Stockholm has maintained much of its artistic importance. My own favourites remain those places which still evoke the artist or patron for which they were created, or to whom they belonged. That personal element is so often lost nowadays, the focus put solely upon the work of art itself, and not on the environment in which it was created, or that which inspired it.
I realised when I had written this that for it to not look like an essay, it would be easier to break it down into two parts. This first part will look at the homes of two of Sweden’s most famous sculptors of the early 20th century, Carl Milles and Carl Eldh.
Millesgården
One of the capital’s most visited tourist attractions, it was once the home and workplace of the renowned sculptor Carl Milles. Today, it is a haven of sculpture! Located on Lidingö, just across the bridge from the city, with views over the water, it is home to an exhibition space, a sculpture garden, and the artist’s home and studio. Sometimes you don’t want to go somewhere to just traipse around endless rooms, your feet getting continuously more sore – you just want to go somewhere beautiful, and see something beautiful! Well the beauty at Millesgården is bountiful, and I’m not just saying that. 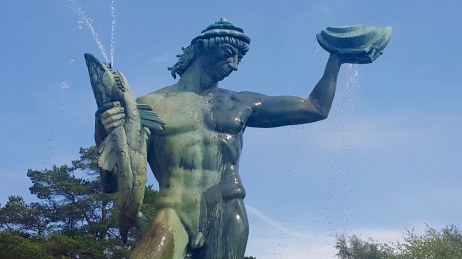 It is a Nordic evocation of the Mediterranean. Columns and plinths distinguish the sculpture from their surroundings, and break up the multiple facets of the garden. Carefully designed by Milles, each nook and cranny reveals something else, whether it be a portico frescoed area, with Titan and the Shell carefully placed in front of the central arch; or The Sunsinger, whose headless and armless body towers over the gardens, his classical prowess surveying all before it. The Lower Terrace plays host to the colossal sculpture of Poseidon, whose body and scale again reveals the influence Milles drew from Classical antiquity; yet whose face with its overly exaggerated features depicts a man rather than an idealised, impersonal form. There is a preciseness, yet organised confusion to Milles’ landscape design – there is no one way to walk around – it is personal and intimate; it was designed to be used and explored, not merely looked upon.
However, if it is pouring down with rain, or you’ve captured enough photos of the sculpture in the snow and the freezing cold has got to you, then the indoor areas, including the artists’ home and studio, contribute to the magnitude of both Millesgården and indeed Milles’ vast oeuvre. Within, plaster casts and smaller bronzes adorn the rooms. Some with a similar columnal interior mirroring the outdoors. This area has been open to the public since the 1930s, after being bequeathed to the Swedish nation following Carl and his wife Olga’s move to the USA.
I would without a shadow of a doubt recommend a visit here, or two – once in the summer, and once in the winter. The atmosphere changes with each visit, and there will always be something you have missed!
The current exhibition is that of the newly opened Josef Frank – Mönster, Möbler, Måleri (21 May – 2 Oct 2016), looking at the creations of one of Sweden’s most prolific and distinguished designers, most famous for the work he did for the company Svenskt Tenn.
http://www.millesgarden.se/ 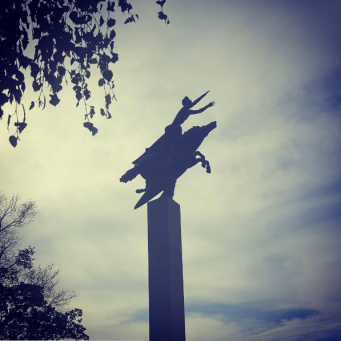 Carl Eldh’s Ateljémuseum
An intimate gem! This is the first thing that comes to mind with Carl Eldh’s Studio. Put in a difficult situation during the construction of a tunnel in Stockholm, whereby the museum was forced to close, it reopened a few years ago, but has regrettably struggled since. However this seems not to have acted as a deterrent, and the Studio Museum appears to be getting back on its feet.
Firstly, it is an unusual and unique building, designed by Ragnar Östberg (also responsible for buildings including the Stockholm City Hall) in 1919. Constructed of timber, it is instead stained rather than painted the traditional falu red. Each part of the building is distinguishable from the other; a section with a cupola roof topped with a gilded sculpture; the second section with a red tiled roof and vast floor-to-ceiling window overlooking the garden below; and the third with a columned portico entrance, bearing a relief sculpture in the pediment. It is wonderful to see such a building tucked away at the top of a hill, just a short walk away from a busy road. 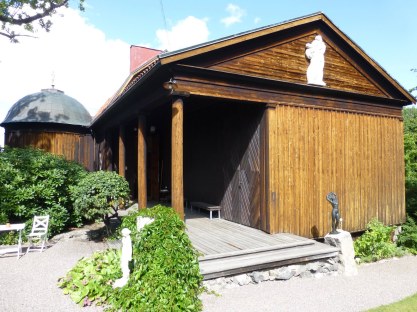 I personally am a huge fan of plaster, preferring it to its more polished and refined sister – bronze. And, well this studio is the perfect place to visit. Only available for tours, unless otherwise arranged, it is probably the easiest and least dreary tour you will ever go on. There are only three rooms and plenty for the eye to look upon. Whether you are aware of the artist’s work or not, you will be amazed to see how prolific an artist he was. In the first room, the sculpture lines the walls and are organised haphazardly in front of the window, with items of furniture arranged carefully around them. Among these works include some commissions, which can be seen in parks throughout Sweden, but also intimate portrayals of his wife and daughter. The second room contains some of his more recognisable works, including his portrayal of August Strindberg as the Poet or Diktaren; as well as the plaster cast for his bronze fountain which can be found on Birger Jarlsgatan just down from Stureplan in the city centre. Furthermore, for any fan of Strindberg, Eldh is a sculptor to know. Numerous works were done by the latter of Strindberg, not only the afore mentioned Diktaren, but also his famous Titanen (depicting the writer as a Titan).
On a beautiful summer’s day this is a place I highly recommend visiting – just so you can take advantage of the light streaming into the rooms and revealing the sculpture in all their splendour!
Despite its relatively small size, exhibitions are staged every year, in which a sculptor provides a juxtaposition to Eldh’s own work – providing not only a new context for their own work, but for that of Eldh. This year, Bianca Maria Barmen is the special guest. Her works can be viewed from 12 May – 2 Oct 2016.
http://www.eldhsatelje.se/index.php/en/#.V0IjCpMrK1s 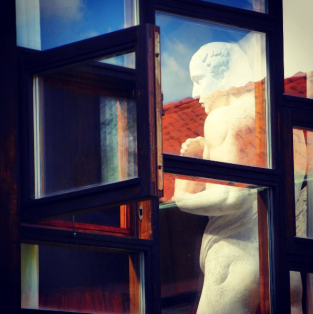