As part of an Anglo-Swedish Society organised event, I made a visit the Josef Frank exhibition currently being staged at the Fashion and Textile Museum in London. Undertaken in association with Millesgården in Stockholm – the home, now museum, of the sculptor Carl Milles – this is the first instance his textiles have been exhibited in the UK. In a cleverly set out display, where textile hangings created wall divides, and where furniture was upholstered in the fabrics against which they were set, this exhibit encompasses the work of one of the foremost figures of Swedish Modernism.

A leading Swedish designer of textiles and interior design, yet of Austrian birth and upbringing, Frank remains a household name in Sweden to this day. In most homes, his infamous tulip pattern or print of the streets of Manhattan, can be found on trays, placemats, tea-towels, and many other household items. Trained as an architect, it was during the 1930s that Frank relocated to Sweden, with his Swedish wife, leaving the rising Nazi sentiment within Austria. It was here that he began a lifelong collaboration with the firm Svenskt Tenn (translated as Swedish Pewter) and its founder Estrid Ericson. Here, Frank turned flora and fauna, the natural and manmade landscape, and the celestial skies into works of utilitarian and functional design.

The exhibition currently being staged in London is a vibrant display of Frank’s work, and for those who have never heard of the man, a wonderful representation of the many facets of his career. Not only do we see the way in which his designs – furniture, ornament, and textile – worked in the context of interior design, we also see the progression of his style and approach to textile design in general. Upon entering the exhibition, a room has been set up to display the many creations undertaken during his time at Svenskt Tenn. Here, the layout is accentuated by shades of green and brightly coloured tulips evoking, yet again, his most recognisable tulip print. It makes a wonderful introduction to the work of both Frank and Svenskt Tenn, as the exhibition proceeds, it breaks down each component of this display. I would, however, add, that more importance could have been placed on his furniture design, rather than merely adorning furniture in the textiles which he created.

Another distinctive design of Frank’s is the use of “islands” of image on a backdrop of colour. The foremost of these, ‘Manhattan’ was created during his time spent in New York, after moving there from Sweden, upon the outbreak of World War Two. Despite this transatlantic relocation, Frank continued to work for Svenskt Tenn. In this iconic print, the island of Manhattan has been segmented, broken up into individual images, surrounded by the roaming street-like shape – perhaps affirming a sense of rootedness in the American city. In another of his pieces, produced in 1936, prior to his move to the US – indeed an earlier approach to distinguishing motif from background – is his own take on the Zodiac. Here, the signs of the zodiac are set against a deep blue, star studded background, the surround creating an almost cloud like effect – as if we, on earth are seeing the stars through the fading clouds of an evening sky. In his designs, Frank brings into the home, motifs and images that would otherwise never have existed within that environment. 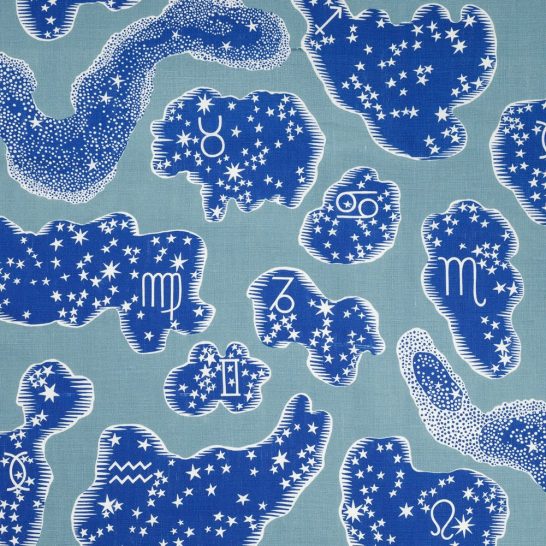 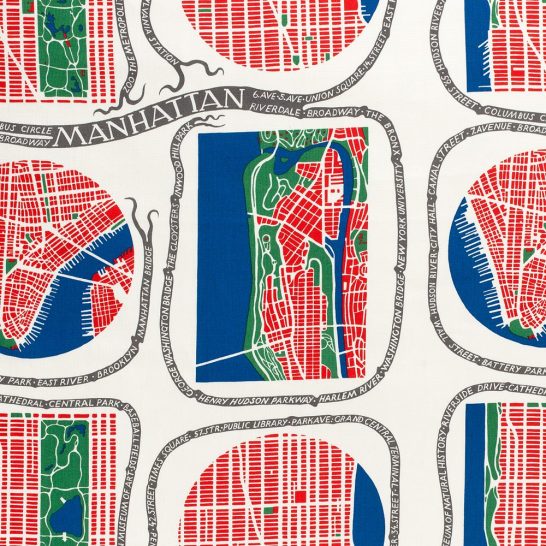 For those who are unfamiliar with the work of Frank, this exhibition, is a wonderful display of colour and modernist intrigue. On the upper level of the space, the rarely seen, and only recently discovered, watercolours by the architect and designer are displayed. Here, as in his textiles, the still life dominates. What is most apparent, however, is although an adept artist, Frank’s skill is most distinct in the vibrant textile hangings on the floor below. The watercolour templates carried out by Frank on the other hand, provide a much greater insight into the preliminary stages of production. These templates, are as much a work of art, as the prints created from them. They furthermore enable us to view the way in which the pattern is printed; in the case of Frank he often printed in a more haphazard manner, rather than remaining strictly linear.

In concluding this exhibition, William Morris features in two examples of his textile design. This attempt to associate Frank with the Arts & Crafts movement, fails to have the intended impact. Although Frank himself acknowledged Morris as an influence on his own approach to image and pattern, this minimal display of Morris’ work as a visual comparison appears more as a sideline than an actual attempt to cross-reference the two designers.

A much more powerful example of the reciprocal influence of design, can be found in the final room, a separate exhibition curated by Tom Hedqvist – “Full Circle & Recycle: 21st Century Swedish Textiles.” What is intriguing is how many of these continue to reflect a direct influence from Frank, yet similarly revealing a development of some of his ideas and design and colour in general. For example, there is a simplifying form and design, or reimagining some of the designers most iconic works, as seen in this piece below.

As an exhibition it is colourful, vibrant and utterly intriguing, for those who have not heard of the artist before. The exhibition itself is a mirage of patterns, with the diversity of Frank’s designs contrasting with one another. In seeing the practical application of his textiles in the upholstery of furniture, or in the mock-room layout, one has an idea of the practicality of his designs – not merely to be seen as works of art, but also to understand how they function within a liveable environment.

The exhibition at the Fashion and Textile Museum in Bermondsey is on until 07.05.17. ftmlondon.org

Meanwhile, back in Stockholm, an exhibition has just begun at the Stockholm Museum of Architecture and Design (ArkDes), entitled “Josef Frank: Against Design” – 10.03.17 until 27.08.17. https://www.svenskttenn.se/en/exhibitions/arkdes/